Oklahoma City is a city with no shortage of entertainment options. The city is home to a professional basketball team, the Oklahoma City Thunder. The city has a vast variety of festivals and museums to attend throughout the year. Oklahoma city has several beautiful golf courses and country clubs. It hosts the Grand National Morgan Horse Show each year and is home to the ASA National Softball Hall of Fame and Museum, and the American Banjo Museum. The university of Oklahoma is also located nearby with the Academy Of Contemporary Music. The city is great for both business and pleasure, making it a very popular destination.

Tulsa Oklahoma, the states second-largest city, is a haven of Southern comfort and cosmopolitan style. A town enriched by its oil heritage, Tulsa boasts world-class cultural attractions, including the Philbrook and Gilcrease Museums, and plenty of interesting things to do. The city stands tall with its magnificent art deco treasures, Route 66 gems and the new Cesar Pelli-designed BOK Center, a state-of-the-art venue for national concerts and sporting events. Tulsa’s lively entertainment districts feature eateries, shopping and gaming, while the Tulsa music scene is the star of the state. Family fun also prevails in Tulsa, home of the highly-rated Tulsa Zoo, while the city’s Arkansas River trails and outdoor recreation areas offer outdoor respites from all of the urban excitement. 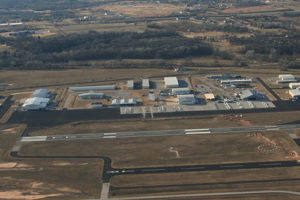 Richard Lloyd Jones Jr. Airport, also know as Tulsa Riverside Airport, is five miles south of Tulsa, Oklahoma and serves as a reliever airport for Tulsa International Airport.  The thriving airport is considered the nucleus of business and economic activity in the City of Tulsa.  Tulsa may not come to mind as a popular destination for business travelers, however it often shows up on corporate itineraries due to its diversified economy. Tulsa has significant economic activity in the aviation, energy, finance and telecommunication sectors. This airport features three runways with the longest being five thousand one hundred feet long.