As America’s sixth-largest city, Phoenix is the gateway to the Grand Canyon, and its history is a testament to the spirit of puebloans, ranchers, miners and visionaries. Projected against this rich backdrop is a stunning panorama of urban sophistication. Phoenix has an arrary of resorts and spas that rival any from across the world. Also, stadiums and arenas worthy of the world’s biggest sports spectacles, restaurants with inspired cuisine and amazing views and golf courses that draw players year round. With the stylish and eclectic shopping centers that are spread across Phoenix, the city is known to draw people from all over the world. 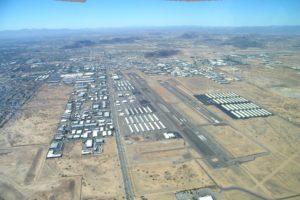 Phoenix Deer Valley Airport is located only fifteen minutes away from the Phoenix business district, and serves to relieve air traffic from Sky Harbor Airport. As such, the Airport is capable of accommodating all segments of civil aviation except commercial passenger service. Safety is a top priority at Deer Valley Airport and they have received recognition for their efforts by receiving the prestigious 2009 Airport Safety Award. This airport features two runways with the longest being eight thousand two hundred feet.

Phoenix Goodyear Airport is classified as a general aviation reliever airport for Sky Harbor,and considered to have one of the best general aviation runways in the country.  This airport is a great alternate to traveling into the congested area around Phoenix and allows business and pleasure travelers the opportunity to fly into the area hassle free. This airport features one runway that is eight thousand five hundred feet long.

Chandler Municipal Airport, located in the technology hub of Chandler, Arizona, is situated in the southeastern portion of Metropolitan Phoenix. The airport is located just 18 miles southeast of Phoenix Sky Harbor International Airport, and offers trouble-free access to anywhere in the region as an excellent business airport. This airport features two parallel runways with the longest being just over four thousand eight hundred feet.

No comments for “Phoenix”